There are people who do it like salmons do: swimming upstream. We need a lot like those.

That’s the type of people that is rebellious towards non justice, backs what can be improved and they do it in the first person, by acting, using their capacities to make world a bit of a better place. Moreover, they enjoy doing it and it makes them happier. 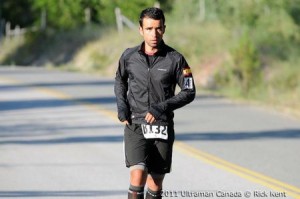 Carlos Llano at the Ultraman of Canada at 2011

One of these people is Carlos Llano (www.cllano.com), an ultramarathoner from Madrid who is making the EPIC 5 (www.epic5.com) which consists of running 210km, cycling 900 and swimming 19, the equivalent of 5 Ironman, during 5 days, in 5 Hawaii islands. Carlos decided that his exploit could serve to raise funds for one solidarity Project and chose the Project that ZakaTiki performs in Burkina Faso, a Project that supports orphans suffering from VIH (www.wenbenedo.es). From October 24 to 28 he will cross the sea and the land of these islands. We will be able to see it on the TV and it will be worth it because if he is good in sports, as a person he is even better.

Carlos recognized what we do in www.ZaKaTiKi.org, a nonprofit association that has teaching the youngest ones about positive values as one of its main postulates. We think that the current situation of crisis doesn’t have roots in the economic circumstances but in the lack of ethics and the loss of values of our ancestors like: effort, initiative, collaboration, solidarity…

It is necessary to dream and work so that the future want actually happens. It depends on all of us. 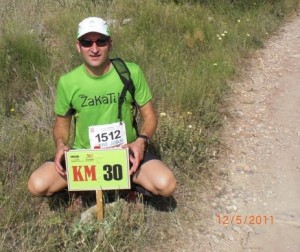 Other colleague from the association, Pere Joan, has already done great effort to perform the Marathon and a half to climb up Penyagolosa with the same goal. Thanks to his initiative we discover that sportsmen are special type of people. They join a lot of competences that are necessary to overcome the crisis moment like the following ones: preservation, effort culture, self-determination, planning to reach an objective and teamwork.

From ZaKaTiKi is what we pretend, to revive these values and we think that the best form is to join simultaneously the elderly ones with the kids in developing solidarity projects within the family mark, being independent of ideologies and beliefs and being focused on the essential part of being a human.

ZaKaTiKi works with schools, entering classrooms to develop activities with the youngest ones, with the youth, introducing them to the WendBeNeDo project in Burkina Faso.

We need to change the reference models that we have in the society. Kids need to have people as Carlos or Pere as their reference, to be like them: dedicated, fighters, putting effort, planning and reaching their objectives. Everyone, including elderly and young ones, needs to see the change in our surroundings and what is possible to make there with dedication, determination and effort. We’ll make the illusion come back and motivate us.

This site uses Akismet to reduce spam. Learn how your comment data is processed.